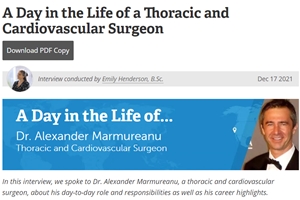 Dr. Alexander Marmureanu offered an interview for News Medical about his daily activities as a thoracic and cardiovascular surgeon as well as his career highlights. News Medical is one of the world’s main open-access websites to the medical and life science field since 2004. A day in the Life of Dr. Alexander Marmureanu, was in detail described and important questions about what led to his successful career were answered.

Influenced by his parents, who were both doctors, Dr. Marmureanu did his medical school in Romania and was drawn by the surgery field rather than something else. He shared the fact that he loved general surgery and then switched to cardiac surgery because he believe that operating on the heart is the ultimate task. When asked about the most exciting project he worked on over the years he shared a situation with a lady who got a hip replacement and doctors ripped the femoral artery and the femoral vein by mistake. Dr. Marmureanu was called to help, and he had to open the groin immediately and had to put a graft in between to save her leg. Read the entire interview here.